After finishing the Axe and Shield project focus switched to creating modular building assets similar to that found in Blizzards World of Warcraft universe. 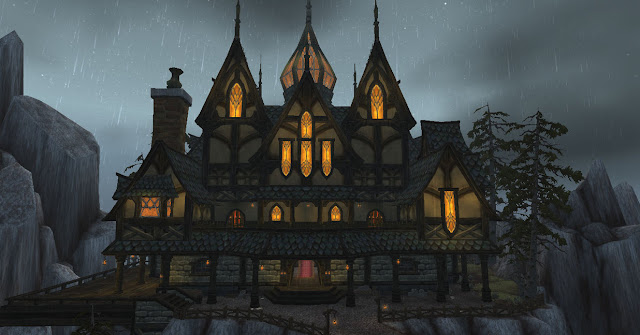 Above is a screen shot taken from the WOW zone of Gilneas, the home to the Worgen race. Personally this zone is the most beautifully polished place in all of WOW. From the art style right down to the colour scheme the artists have really done an amazing job across the board.

http://www.youtube.com/watch?v=IbAM5xxqCEM&feature=related
Lead Environment Artist Gary Platner talks about WOW in this interview and explains how the consistency between the buildings to the ground textures, the lighting and the trees has made this Realm look gorgeous. His approach to the art of the game is to have everything look like it was done by the same guy. Personally I feel this has been achieved in this zone, everything works to a specific cohesive theme.

The buildings created where a combination of a few themes in the WOW universe. The texture work of the assets as well as the building shape and structure drew heavily from the colour pallet  and style of the buildings in the Gilneas zone. 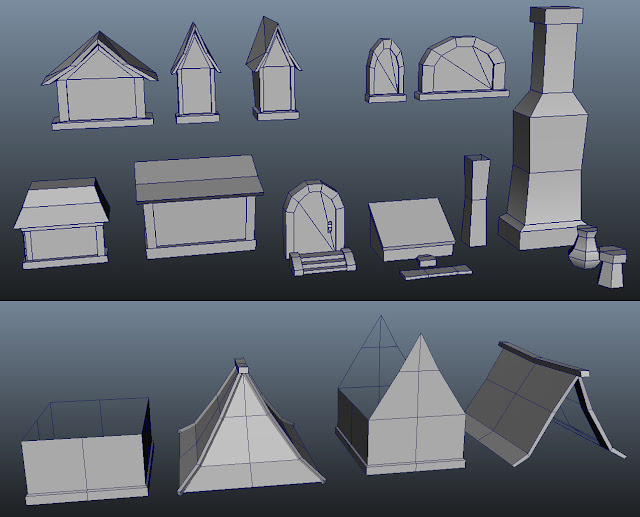 Above are the modular assets that were created.  They can be used to create a verity of Building shapes and sized. 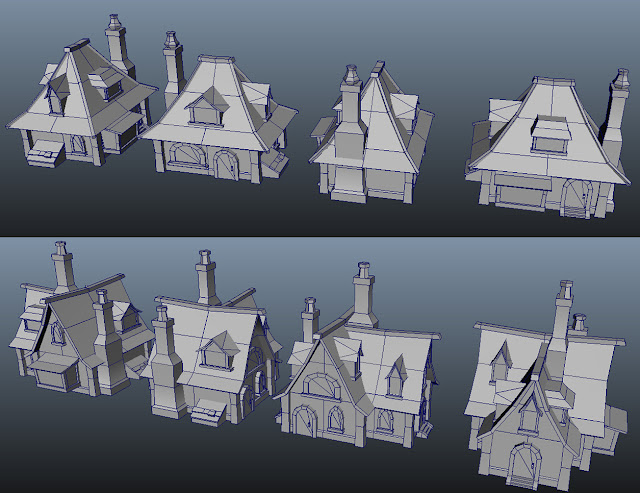 Above is an Idea of the how these building pieces can be combined to create houses of different size and shape. At this point the separate assets where UV-mapped and from here the texture work began.

The images above show the texturing process of these models. This work flow was learned from my previous Blizzard projects and inspiration was taken from the work of Tyson Murphy.

Here is a break down of how these models where textured explain what has been done in each image:﻿

Image 1: This image shows the meshes in wire frame before texturing has begun.

Image 2: This is the first pass of the texture created in photoshop, the aim of this texture pass is to   block out the shapes of the model and lay down the basic colour information.

Image 3: Here I have blocked out the shape of the wooden beams on the window frames, the door and the steps.

Image 4: At this stage details have been added to the wood to show its texture and also the shape of the bricks has been added. The grooves in the wood have been created by using a multiply layer.

Image 5: Now details have been added to the Brock work, the highlights and dark tones in both the wood and brick have been created. Dark tone using a multiply layer and highlights being created using a Colour Dodge layer. This means that the colour used whilst painting doesn't need to be changed as the effect created by these layers does it for you. Of course Taking into account the different shades of colour that are used to show lighting information. ( This means that the colour of the textures are lighter at the top of the model then at the bottom, this is taking into account where the object will be lit from in the environment. In most cases light will be coming from above, so the texture has to  be painted as such.)

Image 6: This image shows the completion of the window pain as well as finishing touches added to the brick work and wood. The window pain had been painted to give the idea that there is a light on in the room. To greater sell this idea bounce light is used. The base of the window where glass meets brick and the wooden frame work around the rim of the window have had the orange/yellow colours added to them slightly to give the idea of light shining from the window. It is probably easier to see this on the finished Texture map bellow.

Image 7: This image is the finished texture, but sharpened to enhance the details. I discovered how this makes textures look better through the advice of some of my fellow artists on Polycount. Using smart sharpen really brings out the high lights and dark tones and makes texture easier to read. 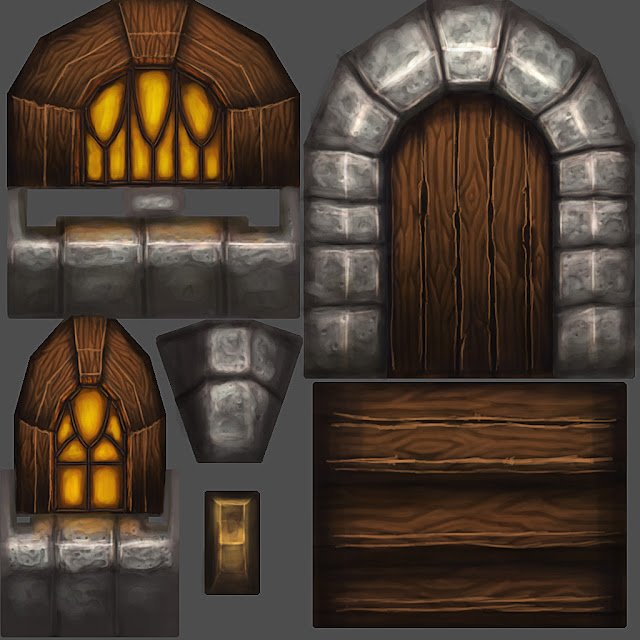 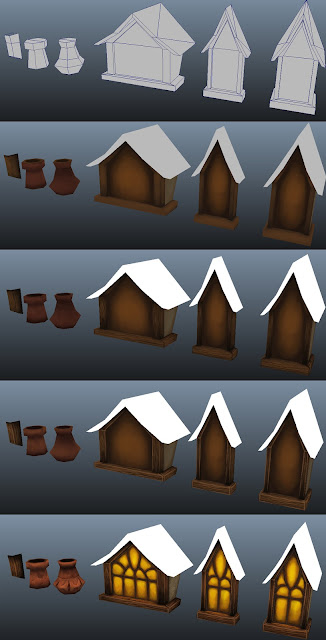 Texturing Process of three windows, two chimney pots and a wooden beam. Work flow improved in the texturing of these assets, the more I do it the quicker and more coherent my texture work becomes. 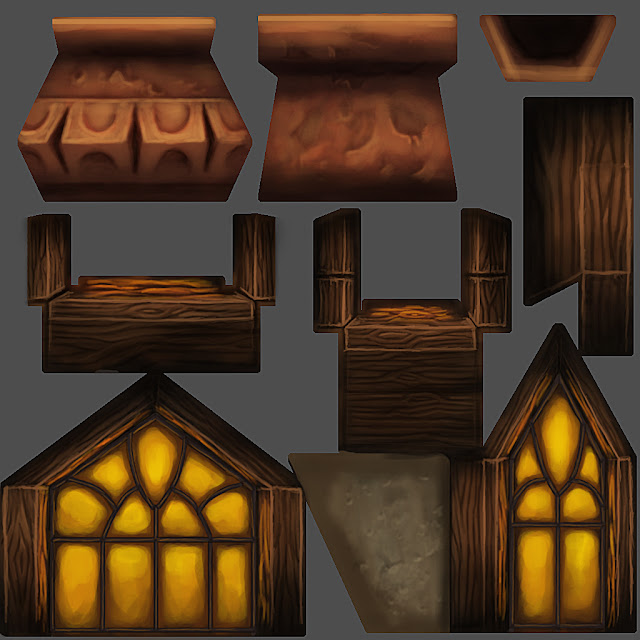 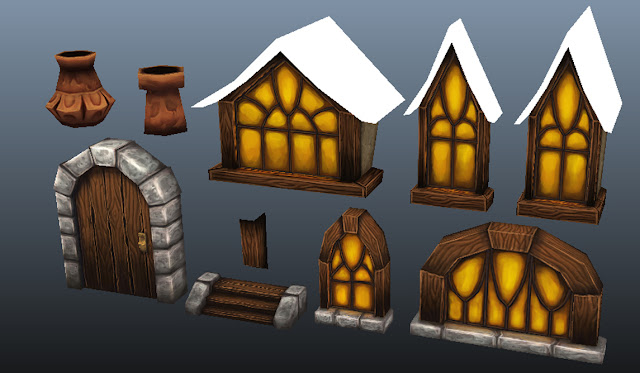 At this point 10 assets have been textured using 2 1024 texture maps. The roofs on the top windows remain untextured as a tillable roof texture will be applied to these areas. 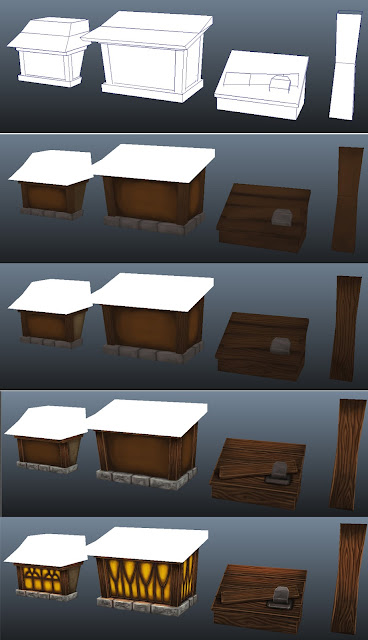 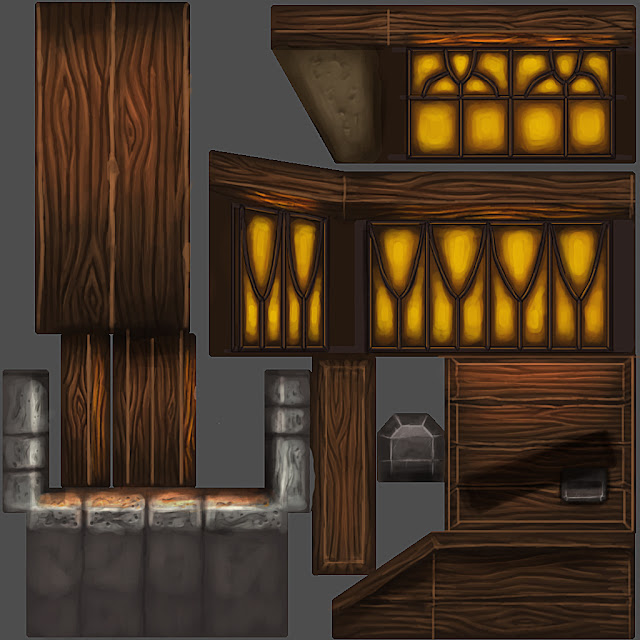 
This is my first attempt at creating a hand painted tillable texture. The aim was to create a roof tile texture that was consistent with the style that was created for the building assets. Again inspiration was taken from the Roof tiles used in the WOW zone of Gilneas. 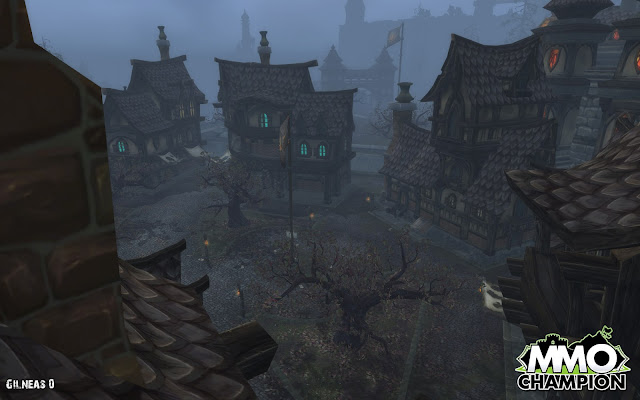 I was initially attracted to the shape of the tiles and how the highlights and dark tones are used to create a layered look and give the illusion that the tiles overlap each other.

The images bellow show the different staged of the texture process. To show case the tiles I combined the building assets to create a small house. I applied basic Lambert colour to the faces that would have a brick or plaster textures applied to them. This helps me judge if the colour of the tiles works in the whole composition.

Images show the different stages in texturing the roof tiles whilst being applied to a house.

The image above shows in three stages the process of texturing the roof tiles.

Stage 1: Blocked out general shape and made sure it flows well and tiles properly. Also making sure there is variation in the tiles, with some being lighter than others. The colours of the tiles also vary from saturated dark blue to purple.

Stage 2: Started adding details and lighting information to the tiles, notice the hint of yellow on the left side of the rim on each tile. 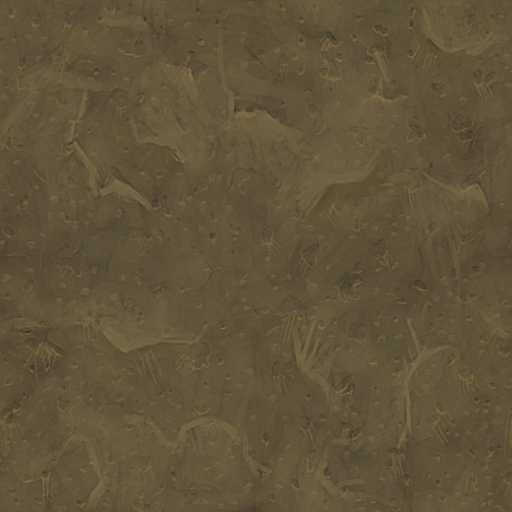 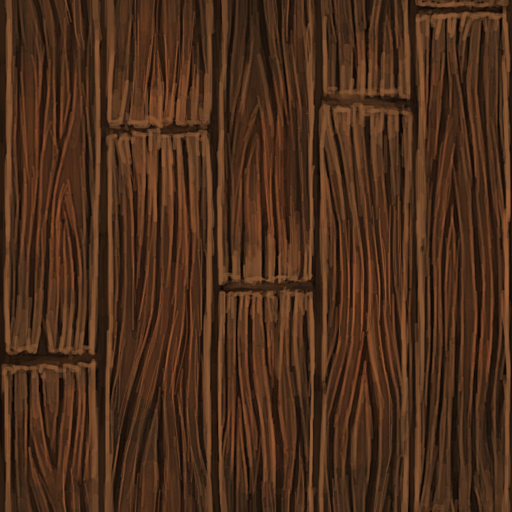 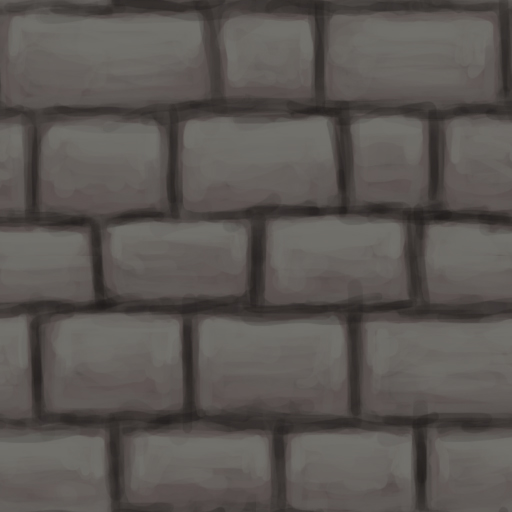 Above are the 4 tillable building textures that were created for this project. Unfortunately due to time constraints the brick texture was not finished. The three other texture however are used more so were the main priority. The roof tiles have already been explained, but here is a brief explanation of the wood and plaster textures.

Wood - This texture was created using a similar approach  to that of the wooden areas in the previous building texture maps. It used the same colour scheme as well as a similar pattern to the wood grain.

Plaster - This texture was quite challenging as there is not much texture information to be found on a plaster wall, so here is where research was needed to find the best approach. 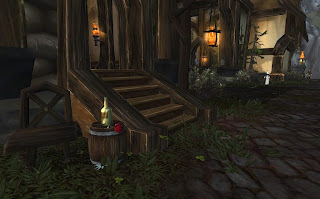 The colour palette used for the texture was taken from the small plastered section of wall in this image above,  But as for the details this image provided very little help. On polycount there is a thread that was created by a very talented student named Jessica Dinh. Her thread Hand painted wells shows her process of creating beautiful environment, the thread also shows great techniques for hand painting textures. Here is a link to here thread:  http://www.polycount.com/forum/showthread.php?t=87797

One post in particular helped me realise how detail can be applied to a plaster texture. The image bellow is a texture created by Jessica Dinh. 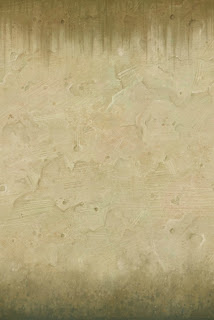 It is visible in this texture work the way in which she adds details to the texture. The angular shapes and small details are really nice and If you look at my plaster texture I have taken influence from this approach.

The image above shows the finished modular building pieces together, I am really happy with how they turned out. 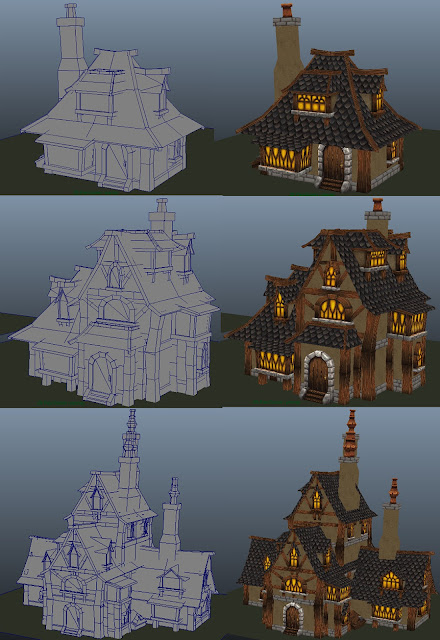 Above is an example of how these pieces can be combined to create different types of buildings, from a small cottage to a medium sized house and even a mansion. The image depicts the buildings in wire frame as well as textured in maya. The buildings are not lit and are relying from the light information created in the textures themselves. If a texture looks good unlit it is more than likely it will look good in game.

The image above shows the tri count for each different house and how they work in terms of scale.

This mini project was successful in furthering my knowledge of texture painting and the blizzard style and I will try and get these models in udk when I get the chance to show them at there best. All in all pretty happy with the results and look forward to take what I have learned and create my own style of hand painted work.

I also have a thread on Polycount where I received help on my Blizzard styled work, http://www.polycount.com/forum/showthread.php?t=92564﻿